Called the “Advocate of the Poor”, Saint Anthony is known for his preaching, as well as for his miracles and devotion to the Virgin Mary.
He is the patron saint of lovers, animals and travellers. 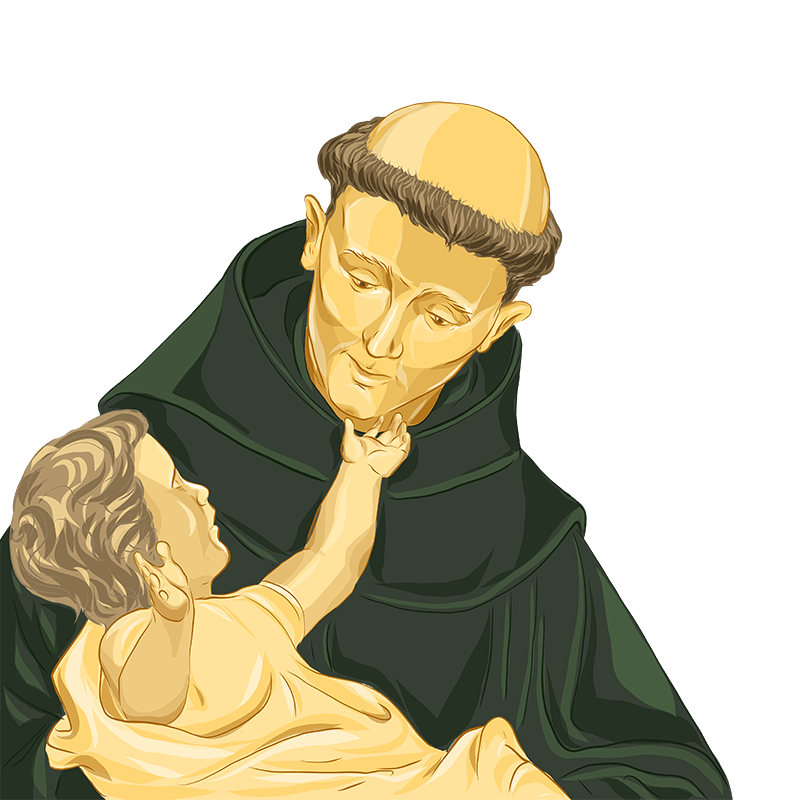 Born around 1190, Saint Anthony left, already a Franciscan, for Morocco, and then for Italy, then France and, again, Italy, converting many people to the Gospel that he lived and preached.

St Anthony died in Padua and in 1232, and a year after his death, he had already been canonised. There was no doubt about his holiness. Pope Leo XIII called him “the Saint of the whole world”.

Son of a noble and wealthy family, St Anthony, who was christened Fernando, was born in Lisbon in 1195. While still a teenager, and disillusioned by promises of wealth and an easy life, he joined the Canons Regular of St Augustine in Lisbon.

In 1220 he moved to the Convent of St Anthony of Olivais in Coimbra to take up the Franciscan way of life, where he took on a new name: Anthony.

Desirous of going on a mission, he headed for Morocco, but a serious illness forced him to return. However, a violent storm diverted the boat in which he was sailing to Sicily, in Southern Italy. It was also around this time that the “general chapter” of the Franciscans, an important assembly, was to take place in Assisi. It was there that Anthony went.

Between 1227 and 1230 he held the office of Minister Provincial of the Franciscan Province of Northern Italy, an activity which later brought him to Padua.

Sickness did not spare Anthony, who died on 13 June 1231. He was buried in the church of Santa Maria Mater Domini, where the Basilica of Padua now stands.

Throughout his life, Saint Anthony was not indifferent to any situation of suffering, need or injustice. People from the most varied classes and conditions of life – the hungry, the exploited, the powerful, the wronged, heads of government, clergy – all were the object of his immediate and effective solidarity.